7 Printmakers Make Their Mark at Gallery 21 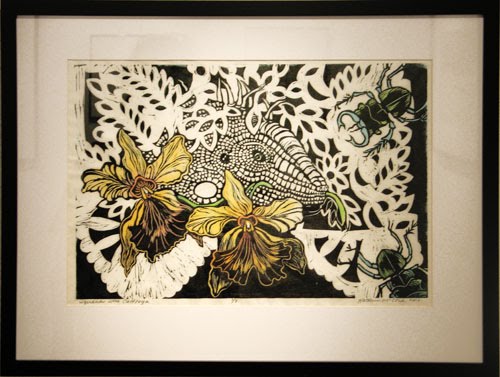 Heavens to Murgatroy, it's been way too long since I put pen to paper, or I should say fingertips to keyboard! But, I'm back...and, have I got a tale to tell! "Are you ready"? "Yes, you're ready"? Well, here it is. I mean, "HERE IT IS"!

If you are an art aficionado, have a keen eye and an appreciation for the minimalistic and highly refined color schemes, intricate line work and graphic simplicity of printmaking, this exhibition is for you. Even if you don't, it is time to acquire an acumen for this ageless and beautiful art form. The 7 Printmakers can teach you a lesson or two.

As a visitor to the "7 Printmakers - 16th Annual Exhibition", I first perceived a graphically simple poster board in the marquee box just outside Gallery 21. It was pale yellow in color with starkly chiseled angular black letters. Suitably representing, I think, the most essential thing about printmaking. Simplicity of design which portrays and conveys the "most impact with minimal effort". Nothing wasted with just the right amount of elements in the composition.

Got your attention? They certainly got mine. So, who are these ageless and mystical purveyors of grease pencil, ink, stone and metal? I'll tell you.

The 7 Printmakers are Raymond Brownfield, Jacqueline Dotson, Robert Fritsch, Kathleen McCord, Julianne Ricksecker, Sfona Pelah and Angelika Villagrana.
Like magnets on opposite polar settings and vectors in the stratosphere, they seek each other out and gravitate together with a subconscious, but, singular purpose in mind. "To create, and therefore to be".

Back from my library research and intimate chats with Sfona Pelah, Angelika Villagrana and Kathleen McCord at the gallery. What an artistic "High"!

If one thinks for a minute that printmaking is a simple uncomplicated process, one is very much deluded. If one thinks that it is "beauty transformed from metal, stone, wood and linoleum", one is aptly correct. If one surmises that it is an art form that reflects a mirror image and is initiated in reverse, again, one would be "spot on". All these things became more and more apparent to me as I spoke with Angelika, Sfona and Kathy. Being a pencil artist myself, my mind ran in ever expanding dimensions just trying to keep up with the magnitude of the process as it was explained to me.

Nonetheless, I was intrigued and riveted to every word. (I think Angelika may have recruited a new printmaker, "in the making", without even trying). As she explained the process to me, vague memories of experimenting with intaglio and grease pencil in high school surfaced. Most of that memory involved feeling frustrated without really knowing what I was doing, but in the brief time I spent with Angelika and Kathy, a whole new world opened up right before my eyes!

Walking through the exhibit, I experienced a great appreciation for these artists, and their endless dedication to keeping an ancient art form alive. It was easy to sense their actual love of the medium from the refinement that is inherent in all of the work.

As a pencil artist, I was drawn to Raymond Brownfield's work which is executed using grease pencil on stone. There is something about black and white composition that I find difficult to resist. Perhaps, it is because there are only two elements in the mix, ie. "the black element of the pencil (positive space) versus the white background and negative space created by the juxtaposition of the two". At any rate, "Ray" as everyone calls him, has a refined and finite touch in applying the pencil work and shading in his lithographic printmaking. I absolutely loved his "Aphrodite" lithograph showing a female figure with her arms raised above her head, fingertips touching, as she twisted her torso to look back over her left shoulder. The unexpected presence of wishbones in the composition added just the right touch of inquisitiveness and surprise. "Likewise, Osteo", a lithograph on stone also depicting wishbones, was enchanting and mesmerizing. Many a visitor to the show was spellbound by this element in Ray's prints. The recurrent theme of "wishbones" in his compositions was amusing and captivating. Quirky, but captivating!

Sfona Pelah's pieces, all untitled, are small but mighty! Scenes and images, mostly in black and white impact the viewer's eye with their slightly tilted layout and landscapes. There is a great deal of dimension in each of her prints. One "Untitled" intaglio, in particular, appealed to me in a dizzying tilted view seen by a passerby at the top of a stairway. The scene depicts winding stairsteps descending into a village where a faraway train winds its way through a mountain passage, and passengers await it at the station. I got the feeling of looking from a "bird's eye view as I gazed at the landscape. Sfona works in a variety of forms such as intaglio, monoprint, collagraph, monotype and digital printing. An interesting aspect in many of Sfona's prints is how she creates more dimension by cutting borders into her plates which adds a wonderful element of decorative embossing along the edges. 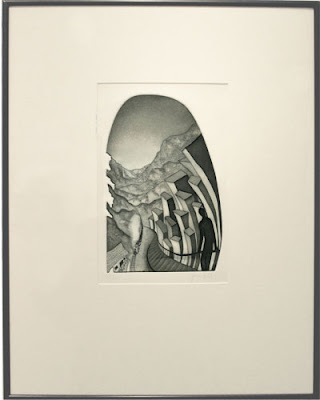 
Angelika Villagrana evokes emotion and a "subliminal memory" with her strongly contrasting woodcuts, monotypes and intaglio prints. Strong, but not overly bright, color is juxtaposed against stark black or white backgrounds, and emphasized by black outlines. The undeniably "French" flavor of mummery in many of her compositions is powerful and spellbinding. One might say her approach to the subject matter is simplistic, almost spartan. But, there was nothing "spartan" about the effect that each piece had upon me. Standing in front of any of Angelika's works put me, and all viewers, right at the "heart " of the matter. The emotional portent of each piece reached right out and grabbed me, completely erasing any need to ask Angelika, "Why"? My hand kept rising, of its own volition, to touch each piece and, thereby, channel its meaning. Gosh! I wasn't impressed with Angelika at all, was I?

Kathleen McCord has a most unusual and whimsically offbeat way of combining patterns that simulate paper cuts, with graphically outlined floral and animal figures. Whew! Was that a mouthful or what? But, it takes that to accurately describe Kathleen's intricately executed and delightful linoleum cuts. My first impression of the work was, "What am I seeing"? It took a split moment (yes, moment) to take it all in and register. Once that happened, my reaction was the beginning of a smile as the corners of my mouth began to twitch. This soon turned to instant glee and laughing out loud! Anyone who would think to combine lace with the Creature from the Black Lagoon is a creative thinker to the Max! And, that's just what Kathleen is. Putting together the Creature, as well as flowers and iguanas, with her lacy linoleum cut backgrounds is an expression in "originality" that I never would have expected. I think that Kathleen has proven that originality never sleeps, at least not in a room where she creates.

I particularly liked the soft subdued hues of Robert Fritsch's prints. Soft, earthy tones mingled with a stippled shading beckoned to me and the other visitors in a quiet, but compelling way. Although Robert displayed only four pieces in the show, each was uniquely memorable in its own light (yes, I do mean light). "3 Apples", a lithograph/color trial, as Robert described it, held me spell-bound for quite a long time. Again, the black stippling in combination with the rosy color of the apples, although minimalistic, was perfectly applied to create this exquisite piece. Another such lithograph/color trial was "Point Loma". Robert not only is a master of printmaking, but, he also has an active lithograph studio located behind his home in Point Loma, where he invites other artists to come and print on Saturdays. Remarkably talented and generous in his sharing of the art, Robert Fritsch is a staple (not stipple) in the printmaking society.

Jacqueline Dotson's intaglio and collagraph prints are contrasts in black and white. Her intaglio print "Flirtatious" captured my attention easily. I am not sure if it was the boldness of the black outline or the figure itself that held me. The print of a lady wearing a hat and bedecked in ruffles, surrounded by an intricately drawn pattern in the background, was amazing. The intricacy of the line work in the background spoke volumes of Jacqueline's patience and dedication to detail. Other impressive pieces in the show were "Marquis", intaglio and "Two Clowning Clowns", collagraph/intaglio. Along with her expertise as a printmaker, Jacqueline is also a talented painter. I always knew good things come in two's!

Julianne Ricksecker is a multi-talented artist proficient in printmaking, monotype, pastel and watercolor. Many of her art pieces and prints depict landscapes and seascapes. That's a pretty "tall order" when you consider the several media that she creates them in. Julianne's works in the show included prints in monotype, color intaglio and drypoint. One of my favorites was entitled, "Foggy Day, Yosemite Valley", a color intaglio print. Quite often, Julianne works on copper and zinc metal plates, where an acid resistant coating is laid on the surface, and then uses a scraffito or scratching method to delineate her designs. Equally intriguing are her monotypes, such as "Along St. Mary River" and "Avalanche Creek". My oh my. "Who's Afraid of Julianne Ricksecker" aka tour de force?

Having known each other for sixteen years this group of dedicated printmakers have accomplished great things. The annual exhibit spearheaded by Angelika Villagrana has always been spectacular. It is an accepted fact among printmakers that they just seem to "know each other", and pole together. When I asked how "7 Printmakers" came about, Ray Brownfield, exuberantly announced that, "I kept bugging everybody and saying, we just have to do a show. We just have to do a show! I guess they got tired of my shouting, and decided to do a show just to shut me up"!

Well, Ray, I for one am so happy that you kept plugging away, because "What a show it was"! 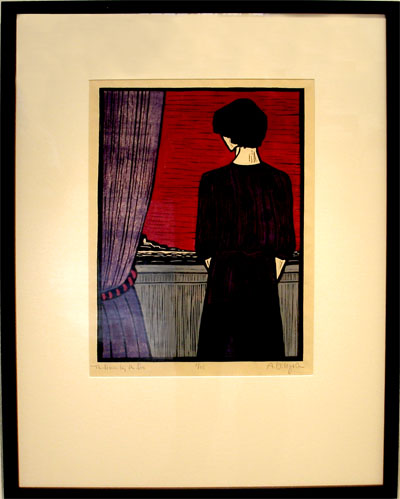 "House by the Sea", woodcut by ANGELIKA VILLGRANA, printmaker
IMAGES ARE COPYRIGHT PROTECTED


Written and posted by Cassandra Shepard, Studio 32
All images, text and content copyrighted, 2010, all rights reserved
Posted by Spanish VIllage Art Center at 8:10 AM